Katarína Kerekesová graduated from the Animation Department of the Academy of Performing Arts in Bratislava, and continued with postgraduate studies, which ended in 2007. Afterward she established her own company, Fool Moon, focused on the production of animated films. She produced and directed the animated musical Stones (2010), a TV series and the TV special Mimi and Lisa, a short film by Ivana Šebestová Yellow (2017) and a 3D animated series, The Websters (2022). She is the chairwoman of the Slovak Association of Animated Film Producers and teaches at the Academy of Performing Arts in Bratislava.

Bill Plympton began his career creating cartoons for such publications as The New York Times, National Lampoon, Playboy and Screw. In 1987, he was nominated for an Oscar for his animated short Your Face. In 2005, Bill received another Oscar nomination, this time for his short Guard Dog. Push Comes to Shove won the prestigious Cannes 1991 Prix du Jury; and in 2001, another short film, Eat, won the Grand Prize for Short Films in Cannes Critics’ Week. His animated features include The Tune (1992), Mondo Plympton (1997), I Married a Strange Person (1997), Mutant Aliens (2001), Hair High (2004), Idiots and Angels (2008), Cheatin’ (2013) and Revengeance (2016).

Hisko Hulsing is a Dutch director, animator, composer, painter and storyboard artist. He studied painting and animation at the art academy of Rotterdam. His shorts Seventeen (2004) and Junkyard (2012) were the official Dutch entries for the Oscars. He directed and did production design on Undone (2019–), an animated series for adults for Amazon Prime. In addition to writing, directing, painting and animating his animated films, Hisko composes the orchestral soundtracks for them.

Director, graphic artist, animator and comic artist Jan Saska was born in Prague. He studied at the Václav Hollar Art School and graduated in Animation from the Tomáš Baťa University in Zlín and FAMU with his film Happy End (2015). Jan is a member of the art group True Lovers. As animator, he has worked (among others) on the feature film Fritzi: A Revolutionary Tale (2019). Currently, Jan is working on short film, Hurricane, based on his comic book of the same name.

Lucija Mrzljak is a Croatian animation film director and illustration artist based in Estonia. Thanks to the Erasmus exchange programme she studied at UMPRUM in Prague. In 2016, she completed her MA studies in animation in Estonia as a student of Priit and Olga Pärn. Her short The Stork (2020) was awarded best Estonian film at the EFTA – Estonian Film and Television awards – and it received the Audience award at Animafest Zagreb. In 2019, she collaborated with Oscar-winning musician Glen Hansard, directing a music video titled ‘The Closing Door’. Lucija is also a passionate illustrator and caricaturist.

Alexander Stein is a German director and producer. He has studied film, theatre, ethnology, journalism and animation. He is the author of the Flambee video projection for water screens at Expo 2000 and has created various film and media installations. He is the CEO of interfilm Berlin.

Stas Santimov was born in Dnipro, Ukraine. Prior to working in animation, he worked as a designer and illustrator for advertising agencies. Stas has worked in the animation industry since 2011. He creates gif illustrations, animated shorts, commercials and motion comics. His films have been shown at many international film festivals. His gif art is in the collections of major NFT collectors.

Tereza Stehlíkova is a Czech/UK artist. She is currently head of the visual arts department, University of Creative Communication, Prague, and has a PhD from the Royal College of Art. She is a founder of Sensory Sites, an international collective based in London that generates collaborative exhibitions, installations and research projects that explore multi-sensory perception and bodily experience. Her project 4 Generations of Women has been shortlisted for the 61st BFI London Film Festival Experimental Pitch.

Lars Rummel is a freelance publicist, curator and programmer for XR-works. He has an MA in media culture from the University of Leipzig and a BA in media science and psychology. In his work, he explores how XR curations can be seen as physical spaces to explore inner landscapes and how these spaces can be told in various ways beyond cramped definitions of media and exhibitions. Recently he started exploring the intersection of XR storytelling, XR exhibitions and more traditional art forms like theatre, dance and painting. 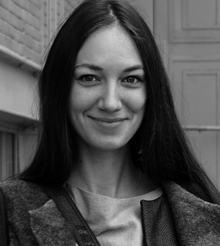 Third member of  the ANIFILM jury for VR films is Viktoria Cherniaha Filmako. Viktoria is an independent animation director from Ukraine. She holds a Master degree in Architecture and has graduated from the British Higher School of Art and Design at Film School as an Art director and Production designer. After working for several years in the field of architecture and cinema she felt the need to realize herself in the world of animation. As Stas Santimov unfortunately cannot join the jury for this category, Viktoria will judge VR films together with Lars Rummel and Tereza Stehlíková.

A 2D artist with years of experience in the creative direction of design projects, Claudia Molinari is a co-founder of the Milan-based independent game design studio We Are Müesli, creators of the award-winning narrative videogames Cave! Cave! Deus videt (2013) and Venti Mesi (2015), the historical investigation card game Colpo di Stato (2020) and the escape room Wer ist wer (2020). A member of the curatorial board of IndieCade Europe festival, she focuses her projects, talks and teaching activities on the enhancement of cultural heritage through game design and visual storytelling.

Céline Veltman is best known for her work on Hidden Folks and is currently the art director of Sokpop’s sequel to Simmiland, along with other personal projects. In her work, she tries to incorporate her love for sharing knowledge, playfulness and creating, through both digital and traditional art.