A Tribute to Zdenka Deitchová

The eight serials that Zdenka Deitchová herself picked to be screened as a part of the festival’s homage to her, without exaggeration represent the classics of Czech animated serials. As a producer, Zdenka Deitchová often focused on commissioned work – in this case commissioned by Czechoslovak Television. The label “commissioned” may sound a bit pejorative to us, but in the case of filmmakers like Miler, Smetana, Bedřich and their excellent graphic artists (that is if they even needed any), they may have unintentionally created something timeless. Something that the audiences like to return to and will likely keep on returning to along with the authors who draw inspiration from these “commissions”. It is well known that Zdenka Deitchová didn’t stop working on animated films after the Velvet Revolution. An example of a successful series created in new and free production circumstances is the still extravagant series by Jaroslava Havettová From the Diary of a Third Grade Pupil, or Edudant and Francimor inspired by the book by Karel Poláček. The lion’s share of its originality is thanks to Vratislav Hlavatý and his design.

Reedy and the Stars – How Reedy saved the Crayfish until his Head got Dizzy
Director: Zdeněk Smetana, CZ, 1975, 7 min 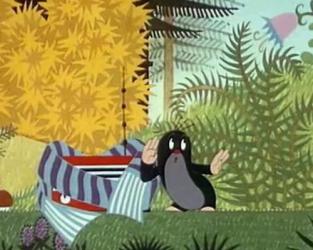 For the Love of Prague

In connection to Zdenka Deitchová receiving the festival’s Lifetime Achievement Award, Anifilm presents a little-known documentary named For the Love of Prague. The film’s title alludes to a book of the same name written by American director of animated films Gene Deitch. In a little less than an hour, its authors try to summarize some of the humorous, dramatic and in every case hard-to-believe stories of this Academy Award-winning filmmaker of world renown. Apart from his own work, Gene Deitch is known thanks to his life story which is tightly connected to this year’s Lifetime Achievement Award recipient. She was and is the reason why Gene Deitch decided to stay in Czechoslovakia (which was then a communist country) at the end of the 1950s. Anyone who hasn’t had the chance to see the English or Czech version of Deitch’s book, now has a chance to sneak a peek into the life of Gene and Zdenka Deitch thanks to this documentary. And much like its heroes, the film itself has a very peculiar history. It was supposed to air on Czech Television but it never happened. The original broadcasting copy cannot be found anywhere, the documentary survived only thanks to a “rescued” DVD copy. So please excuse its quality. And what’s more, there are several versions of this documentary. This one, which will see its premiere on the big screen at Anifilm, was edited by Gene Deitch himself.