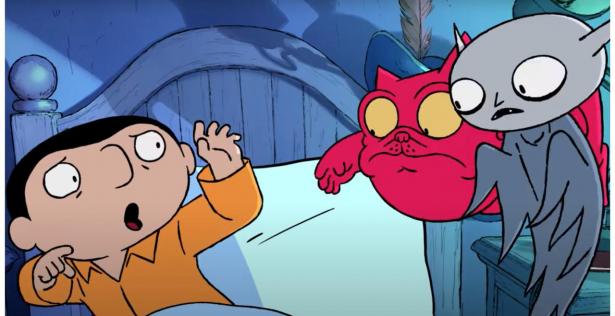 The phenomenal graphic artist Joann Sfar has created a number of successful comic books. He first tried the role of a director some ten years ago when he adapted his popular comic book series The Rabbi’s Cat for the screen. Now he returns with an adaptation of another one of his popular series named Little Vampire. This suspenseful feature film for the whole family plays on fairy-tale and horror stereotypes. It was previously nominated for the César Award and competed at Annecy in 2020.

Vladimír Jiránek, Václav Mergl, but also, for example, Paul Bush – these are just some of the authors whose films we’ll be screening in this block of animated shorts that have the common theme of evolution. The authors reflect on “things that went wrong” in the evolution of life on our planet in the last few decades. Each of them does so in their own way – some in all seriousness and some light-heartedly, using irony, slapstick comedy, or elements of the absurd. This varied block of films of different genres, animation techniques, and artistic styles is part of the themed Planet A non-competition programme.

Sections introducing so-called works in progress are popular parts of many festivals. What films are currently being developed, prepared, filmed, or finished? Today, Anifilm offers its visitors a unique opportunity: to take a peek at the current stages of production of two upcoming Czech feature films – Golem and Newts – and get the scoop on how far along they are directly from their authors. Golem is a project by director Jiří Barta and screenwriter Edgar Dutka, the winner of this year’s Lifetime Achievement Award for Animation.