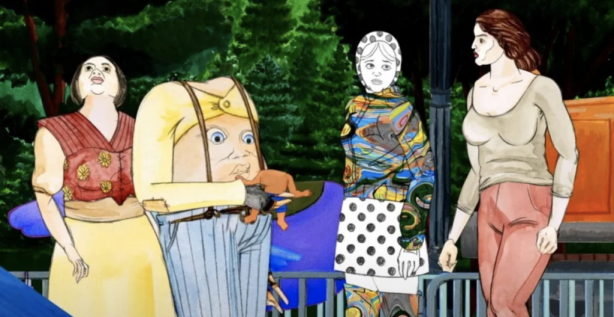 The international jury of this year’s Anifilm includes well-known experimenter Momoko Seto renowned for her unconventional animated films exploring invisible processes that go on in the lives of plants and animals. Today, you’ll have the opportunity to find out how Momoko makes her charming films. The director is Japanese by origin, but she lives and makes her films in France.

The unconventionally narrated feature Tokyo Godfathers is one of only a handful of films made by the late director Satoshi Kon. This remarkable animated feature, in which heated and crazy situations and coincides play equally important parts, is included in the Queer Animation section. We are screening its newest, edited English-dubbed version (with Czech subtitles).

One of the contenders for this year’s Animorph for the best feature film. This quirky film by artist and director Dash Shaw, whose film My Entire High School Sinking into the Sea (2016) was awarded a Special Mention of the Jury at Anifilm 2017, will take us back to an alternative version of the “hippie” 1960s and tell the story of a group of women who establish a special zoo for cryptids–mythical animals and other (often dangerous) creatures.