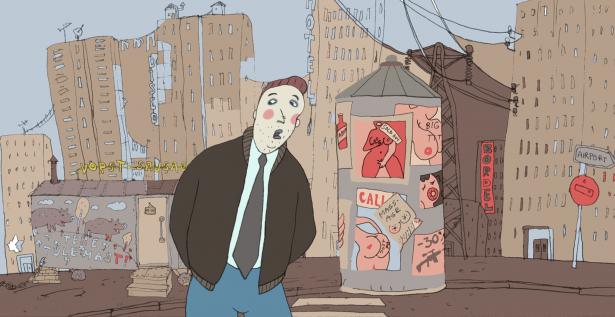 We would never dream of leaving out Estonian animated films from our Animation & Humour-themed selection as that would mean we would deprive our visitors of their uninhibitedly absurd and sometimes even disturbingly morbid humour. Tonight, you can enjoy the distinctive qualities of Estonian animation to the full as we will be screening the feature film Frank & Wendy, which was co-directed by Kaspar Jancis, Ülo Pikkov and Priit Tender.

Masterclasses by American independent director Bill Plympton are much celebrated and sought after, but not everyone has had the chance to visit world-class festivals, where he usually gives them, to see (and hear) for themselves. Now you have the opportunity to attend one – to see some of his work and learn how he approaches hand-drawn animation, which he uses to make even feature-length films all by himself.

Where is Anne Frank?

Ari Folman, who has won renown for his powerful animated documentary Waltz with Bashir, is currently probably the best-known Israeli director. This year, we are screening his new film, an original take on The Diary of Anne Frank set in the present, as part of our feature film competition programme.