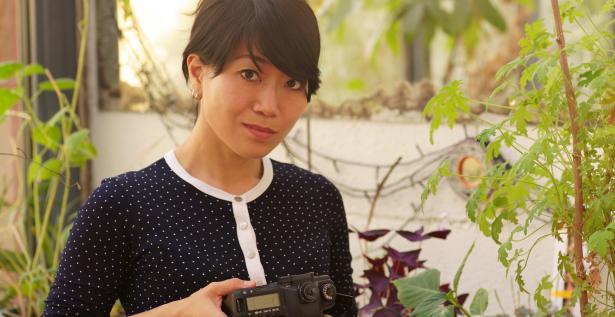 The international jury of this year’s Anifilm includes Momoko Seto, director of charming natural experimental films. Momoko is Japanese by origin, but she lives and makes her films in France. Her participation in this year’s festival is connected to its theme Planet A – after all, one of her films carries the same name. Those who would like to find out how she makes her films inspired by hidden wonders of nature can attend her masterclass on Saturday.

Your films are made in a unique style. Where does your inspiration come from?

From observing the tiny nature. From looking at little lichens and imagining how great it would be to walk inside these lichens.

What do you find to be the most fascinating about nature?

Close to me. In a common landscape, everyday environments.

Can you describe step by step how you proceed when you make your films?

First, I write a script with the story, events, the end. Then I make a storyboard with precise points of view, camera movements, cuts. For the shooting, I set different installations for each shot (sometime with several cameras). Then we move on to editing and compositing, which are done in parallel. After this big part, comes the recording of sounds with a Foley artist, sound editing, and mixing.

Which part of making a film is your favourite and why? And which part is the most difficult for you?

My favourite part is the shooting. There is real creativity and an artistic challenge that I like.

The most difficult thing is probably when I have to write 100 versions of my project for the sponsors.

You are a Japanese national creating in France. What are the conditions for animators in France? Do you think you could make the same films in your country of origin?

The conditions for making films in France are exceptional. There are a lot of grants and subventions for artists. In Japan, there are no such financial opportunities for artists. And if there are, they’re very rare. So no, I think I couldn't make this kind of film in Japan.

What are you working on now?

I am now working on my first feature project that I spent 5 years writing with a scriptwriter, and 2 years of financing… Hopefully, we are going to start filming in October 2021.