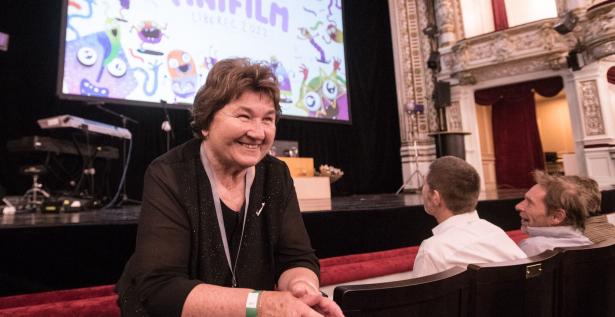 Yesterday at the opening ceremony, Anifilm awarded its Lifetime Achievement Award for Animation to editor and former lecturer Jiřina Pěčová, who worked, for example, with Gene Deitch, Václav Bedřich, and Vlasta Pospíšilová and edited a number of popular animated films and series, including Bob a Bobek, Maxipes Fík, Fireflies, the Fimfarum trilogy, etc. We will be showing some of her work as part of the Jiřina Pěčová for Children screening block in Cinema City on Thursday and Sunday. Her masterclass, where she will talk about her work as an editor, begins at 11.00 on Sunday in the Grandhotel Zlatý lev. In her interview, she talks about the characteristic aspects of analogue editing and the editing of animated films as well as about her favourite projects.

I heard that before you became an editor, you worked for Kreslený film as a tracer. How did you get your first filmmaking job, and how did it happen that you later got into editing?

I first heard about Kreslený film when I was in second grade, in 1947. One of my older schoolmates was drawing Donald Duck in an after-school club, and she told me that she wanted to work for Kreslený film when she grew up, and I liked that. Years went by, and in 1957, I graduated from secondary school. I didn’t get a recommendation to pursue further education, so I spent a year doing all kinds of temp jobs. Back then, my mum worked as a payroll accountant at Barrandov Studios, and she heard that the Bratři v triku studio was looking for new employees. I applied, did a three-day test for the position of a tracer, which involved tracing drawings on cels, and they hired me. I did this job for a number of years, but I always knew that it wasn’t the right thing for me. At the time, the commissioned works department was being established. This department produced films like Tom a Jerry or the Academy Award-winning film Munro, which was directed by Gene Deitch. I was working at the programme department, where we did thick, straight lines, and I was not very good at it. I completely flopped when working on Rozum a cit by Jiří Brdečka. The character of arquebusier was too much for me, the thick, straight line I drew was shaky, and I spent a lot of time scratching it straight. They transferred me to the commissioned works department, and that was a better fit for me. I assisted camera operators by handing them cels with characters that were correctly numbered and ordered in layers so that they wouldn’t waste time. And I was quite fast and always handed them everything in time. Thanks to that, head technician Bořivoj Novák noticed me during the shooting of a film by Ladislav Čapek and asked me if I wanted to work in the editing room. Naturally, I said yes. I was supposed to start working there on Monday, but I eventually didn’t because they hired another girl instead of me based on a recommendation by Ladislav Hofman, brother of Eduard Hofman, the director of Bratři v triku. So then I underwent training for a projectionist and I screened films, including features, for directors, for example, Vojtěch Jasný. One time, I also screened Henry V / Richard III for Jan Werich, and he was thrilled with the performance of LaurenceOlivier. After the film, Mr Werich asked me to perform the “on your knees, everyone” gesture for him, and he then kneeled before me in the corridor. Everyone around was utterly dumbfounded because they had no idea what was going on. (laughs) Sometimes, I would also assists camera operators with stop motion recording, and I attended a two-year evening film editing programme at the Film and TV School of the Academy of Performing Arts in Prague. In 1965, I went on a maternity leave, and when I got back to work a year later, I found out that the projectionist job had been given to someone else. They offered me that I could head a team of tracers, which I refused. Luckily, an assistant editor quit at the time, and I got her job. I then worked in the editing room as an assistant to editor Zdeňka Navrátilová for many years. I first got my own assignment, which was to edit credits, much later when we worked on Fairy Amálka.

How many female editors worked in the animated film industry back then? Is there anyone whose editing work inspired you?

At one point, the Bratři v triku studio had three female editors – Jana Šebestíková, Marta Látalová, and Zdeňka Navrátilová. After Jana Šebestíková passed away, the studio didn’t hire anyone to replace her, so just the other two were left. They had their own female assistants, who would later work on an entire film by themselves. I was one of these assistants, I worked for Zdeňka Navrátilová, while Marta Látalová’s assistant was Gaia Vítková. After the two editors retired, I and Gaia replaced them and became editors. My assistant was Bohunka Šrámková and Gaia’s was Judita Čapková. As for Loutkový film, I’m not completely sure, but I know that Magda Sandersová worked there, and then there were Jitka Kavalierová, who did editing for Břetislav Pojar, and Zdeněk Smetana’s daughter, Věra Benešová, who worked with her dad as well as other authors. I got to puppet animation only much later, in the 1990s, when Vlasta Pospíšilová asked me to edit Fireflies. As for inspiration, I have to say that I was very lucky that my “boss” was Zdeňka Navrátilová – she’s an extraordinary person who taught me a lot and also gave me many opportunities. Even when I was still her assistant, she let me, for example, pick and add Foley sound effects to films or even work with composers and add music to films, which I enjoyed doing the most.

What is specific about animated film editing?

To compare the editing of live-action and animated films, we could draw an analogy with sewing and embroidering. Animated film editing is fiddly work that requires a lot of patience and is done at a smaller scale – unless it’s a feature film. I would dare say that it’s also a more masterful work than digital editing and even than the editing of live-action films. We could not afford to make mistakes, because each cut meant the loss of one frame and it could not be reversed. You work with shorter shots, and sometimes, we would be missing frames at the end of a shot to finish it and we had no way of getting any more, so we would try to come up with all sorts of cutaway shots to maintain continuity with the following shot. But that happened very rarely. The advantage of editing an animated film is that you can cut and shorten shots when they are too long. There are also differences between the editing of two-dimensional hand-drawn films and puppet films that take place in a three-dimensional space because in the latter case, you also need to take into account various nuances, such as shot and reverse shot, which in hand-drawn animation looks like an error.

I’m sure the work of an editor must have been drastically different before digital technology became widely used in filmmaking. Could you tell us how you reacted to the arrival of digital editing? Did it make things easier for you?

JP: The last film on celluloid that I edited on an editing table was the series Čtyři uši na mezi, which I worked on with director Nataša Boháčková. Then I started digitally editing animated series for Czech Television, and I did quite a number of them. But that was a different kind of work. There was a technician in the digital editing room who did the editing based on my instructions. I myself did not operate the machines. The only thing that I learned doing digital editing was marking lip syncs on exposure sheets, which I later utilized especially when working on the film The Hussites by Pavel Koutský. Of course, that was easier because if I was missing frames and I needed the shot to be longer, it could be easily digitally lengthened. What I think is a bit of a problem is that in the age of digital editing, everyone is suddenly an editor, and unfortunately, it often shows. Editing is after all a profession you need to study for to do well.

Have you ever wanted to edit live-action films?

I’ve never had the opportunity, but I did finish the editing of one medium-length film by Gene Deitch titled Zlateh the Goat after Marie Čulíkova, an editor with Krátký film. During the making of the film, the director kept coming up with new ideas and constantly wanted to make changes to the film, and since Marie Čulíková was an upfront woman, she kicked him out. Then the film landed in my editing room, and I finished it. That was my only experience. To be honest, I think I wouldn’t really have the confidence to do a live-action film. Sometimes I would feel the urge to shorten some live-action film that I had just watched, but I never really got the chance to edit any.

Which film or series that you worked on do you remember the most fondly?

What I liked the most were the first seasons of the Bob a Bobek series, which were written by Vladimír Jiránek. They were fast-paced, funny and masterfully directed by Václav Bedřich. The same goes for the Maxipes Fík series. Both were scored with wonderful music composed by Petr Skoumal, with whom I loved to work.

You have worked with a wide array of animated film directors. With whom did you enjoy working the most? And is there someone you wanted to work with but never had the opportunity?

I enjoyed working with all of them, really, but I would single out my collaboration with Václav Bedřich. He was an excellent filmmaker, and he taught me a lot. He knew and could do all kinds of visual condensations and contrast cuts. From time to time, he would get angry and repeatedly slam the script on the table when I dared have a different opinion, but he was a great teacher. But I had more friends among composers. Besides Petr Skoumal, whom I have already mentioned, I also became friends with Zdeněk Zdeněk, and we still see each other today.

When you lectured at the Academy of Arts, Architecture & Design in Prague (UMPRUM), you worked with young authors or more precisely students of animation. What was this experience like for you?

I very much enjoyed working with students. Sometimes, they would stubbornly insist on doing something that I knew didn’t work. I let them do it, so that they would find out for themselves that it simply does not work. You learn the most from your own mistakes and you remember them. I recall that many students created nice visual exercises but without any sound. I advised them to find some music and add it to them. They all managed to do it, and they saw that it was worth it because adding sound to an animated film always improves it. For several years, I headed practical classes at the Film and TV School of Academy of Performing Arts in Prague, and I would invite students to the editing room to see what working with a director was like or how music recorded by the Film Symphony Orchestra was added to films. Some of them said that they learned more there than from lectures in school.

Are you working on any project now?

I don’t work anymore. The last project that I worked on was a film by my student Josef Žárský at UMPRUM back when I still lectured there.