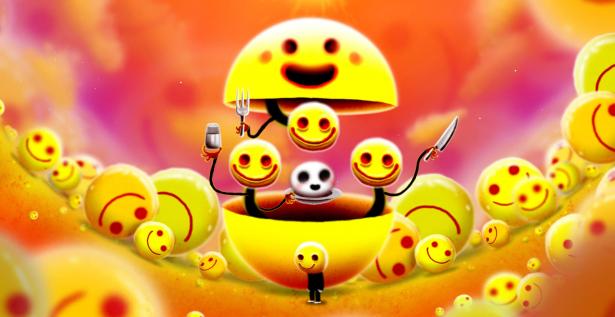 Artist, animator and game designer Jaromír Plachý from the independent Czech game studio Amanita Design came to Anifilm to present a new computer game the studio is developing. It’s called Happy Game, but as the author pointed out, it’s actually not very happy. And it’s definitely not for kids. The player will take on the role of a little boy caught in a terrifying nightmare, in which he has to pass through three unique worlds. Jaromír will give his presentation on Friday at 19.30 in the Library.

When and why did you start working on Happy Game?

It all started in autumn 2014. Back then, I was still working on my previous game Chuchel, which is sort of an interactive slapstick comedy, and I needed a break from all the fun. As the saying goes – when you laugh for too long, your smile turns into a grimace.

If you had to describe Happy Game in one sentence, what would it be?

A morbid absurdity for lovers of mischievous humour and all things weird and bizarre. Or: “A don't worry, be happy game.”

You characterized the game as a psychedelic absurd horror. Will we get to see your own nightmares in it?

Not mine, no, but that doesn’t mean you won’t see yours.

What’s different about it compared to your previous games?

We are still placing a lot of emphasis on the visuals and the soundtrack, which is again being created by the band DVA. The duo has already worked on my previous games so it will definitely sound familiar, but it will, naturally, have a horror feel to it. And since we’re at Anifilm, I should point out that we’re using stop-motion 2D cut-out animation so this part’s pretty much the same as well. And there will again be a lot of fun and quirky moments and absurdities, so if you strip away a bit of blood and some screaming, it’s basically the same thing as usual.

What do you enjoy the most about working on this game?

I guess the most fun part is coming up with it all. Coming up with such a goofy idea and then actually making it into a real game. For example, the head of Amanita Design, Jakub Dvorský, says he never knows whether I’m joking or being serious. I personally really like the contrast – that after the poetic Botanicula and cheerful Chuchel, we suddenly surprise everyone with this thing that looks like something from another planet. It’s like a blow to the head.

Who is the game meant for and when will we get to play it?

The thing is that all those years that we spent developing the game, we had no idea how people would react to it. Especially in the context of the games our studio has released so far, which are all suitable for every player. They were cheerful, accessible, there was no blood... And then, when we released a trailer and a demo at the end of last year, we finally got some reactions, and luckily, they were mostly positive. I’d say that players who feel like relaxing with something weird could enjoy the game. But Happy Game is definitely not suitable for kids – like, really unsuitable. At the moment, we’re mostly finishing up some “technical stuff”, and we expect to release the game for PC, Mac, and Nintendo Switch after this summer.

Do you have time to work on any other projects besides Happy Game?

I do have some time. While the game is being developed, I’ve made some music videos, I’ve been coming up with new game ideas, and I’ve created a few books. It’s mostly the programmer who actually makes the game so I have quite a lot of time to have fun with some side projects. For example, my wife told me she was disappointed that I had been doing only ugly things lately – so I made a book of rhymes for kids Básně z dásně. For our little son Pepa, I made a concertina book about a little piggy, and for myself, I made this raunchy book called Piňďa a Růžové něco. So you could say I’m trying to spend my free time productively.