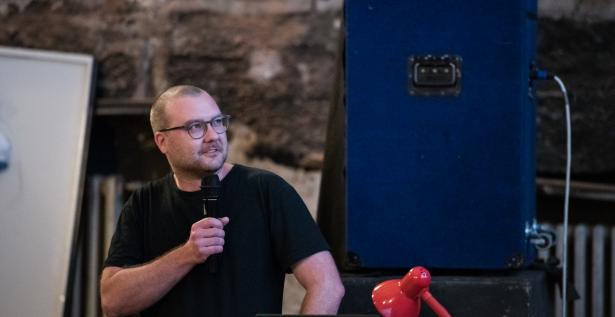 When did you realize that animation was just the thing for you?

I realized that animation appealed to me quite early, when I was in secondary school, actually. I was studying art as I believed it would increase my chances of getting into an animation school in the future. I remember watching this TV documentary series on animation where they showed that quite a lot of people were producing animated films on their own in a garage, for example. And I thought it was wonderful that you could try making your own film at home with no special equipment. I’d say I was also lucky that digital technology had already become widely accessible to ordinary people at the time – only a few years before that, people commonly had to work with celluloid. I also received my first digital camera in secondary school, which I used for my first attempts to bring various scenes to life. This proved much easier than when I previously tried to record stop-motion frames by switching a VHS video camera on and off – instead of animated scenes, I would get these weird glitches.

You studied animation at two different schools. How different were the ways film animation was taught in the studios at the Tomas Bata University and the FAMU Department of Animated Film?

My studies were affected by atypical circumstances. When I enrolled in the Animation Studio in Zlín, the school was in excellent shape, but at the end of my first semester, its management changed, and the programme then gradually fell apart. Students in the year above me basically finished a slightly different programme from what they had started studying because the original one had ceased to exist. But at the beginning, Zlín offered its students amazing facilities because the classes took place in Karel Zeman’s and Hermína Týrlová’s original studios and we were even using original equipment. I very much appreciated that we got to work on the original sets a try out, for example, old systems of brackets and rails from which puppets or lights were suspended above animation tables and that we had the chance to do animation exercises using all three basic techniques – puppet, drawing, and cut-out animation. FAMU, at least when I went there, had no such facilities or equipment at its disposal. However, considering that the programme in Zlín gradually disintegrated, I actually got more out of my studies at FAMU due to the stability the school offered. Zlín suffered from a lack of direction, which may have suited students that had their own vision right from the start, but when I was finishing my graduate film for my bachelor’s degree, I sort of felt that I hadn’t learnt that much at the school, and that is why I then applied again to a bachelor’s degree programme at FAMU.

Can you describe the creative process behind The Robbery, one of your first films, which has been influenced by slapstick comedy?

My choice of the simple visual style I used for The Robbery was motivated by external circumstances, namely, I was running out of time to finish my year-end school projects. Originally, I had a completely different story in mind, but during the holidays before the September deadline for our year-end projects, I realized I had no chance of getting it done in time, and I had two weeks left to come up with something new for the assignment, which required us to base our films on proverbs. So I thought about what kind of film I could animate in only two weeks, and the result is this slapstick cartoon with a very simplified, rudimentary visual style. I can’t even remember what proverb it was supposed to be based on, but I do remember that I somehow managed to lie my way out of it during its presentation. (laughs)

Your films, comics, and illustrations have an easily recognizable style to them. They are often universally understandable, simple stories with a meaningful point told with no words and full of brutal, especially physical humour and elements inspired by various typical characteristics of the Czech national identity as well as the meme culture. And your art is also characterized by a contrasting black-and-white visual style...

One of the sources of inspiration for my work is what I personally experience or what I notice in day-to-day life. The black-and-white form is dictated by my limits – simply put, this simple visual style is easier to work with for me. For one thing, I’m not really good at using colours, and for another, this visual style has so far suited the themes of all of my films. But I can imagine abandoning black and white in the future, if the theme of the film calls for it. The reason I make films with no words is that I realized long ago that when I watch foreign animated films, I have trouble dividing my attention between the picture and the subtitles. Of course, if the film is in English, most viewers will understand it, but if it’s a Czech film that you want to see screened at festivals, you have to expect that it will be more often than not screened with subtitles. And I think that a film has a major advantage if it manages to bypass this issue.

As for memes, pop-culture references, or the characteristics of our national identity that you mentioned, it’s true that I thoroughly enjoy working with them as well as consuming them. Even though I’m not, for example, a die-hard fan of all anime, I do have many favourite Japanese films, whose specific features can immerse the viewer in a completely different world or mentality. In my films, I also endeavour to use particular moments as substitutes that can capture and express our national identity. Such moment might be the depiction of a typical Czech convenience store or one of the pubs in Žižkov. I’m quite glad that I found these topics because before, I didn’t really know what my films should be about. When I was finishing my studies, several friends and I got temp jobs as construction workers. This allowed us to experience a rougher kind of life, which I like to portray and map with my films and their humour.

Your successful, retrospectively narrated film Happy End was inspired by a folk anecdote. I heard that you started working on the film when you were still in Zlín, but you finished it only later as your graduate film at FAMU. How long did the entire process take, and how much did the project change after you took it to the other school?

In fact, I already finished Happy End in Zlín, it was my graduate film there. We had a year to finish our bachelor’s degree graduate films, which were to contain approximately five minutes of animation – that was quite a lot, considering that we simultaneously had to study for our finals as well. The overall concept and editing of the first version of Happy End were fine, but visually, the film looked like art brut or a semi-finished piece. I submitted it to various festivals, and it was, coincidentally, picked by Anifilm, but it didn’t have much success – simply because it was not polished. When I started studying at FAMU, I thought that it was a pity that my film didn’t really reach its full potential, and that’s why I started working on it again. I was lucky in that the school allowed me to continue developing a project I had been working on previously and that they let me rework and polish it. The biggest change was that I completely redraw the original version and made it nicer, and even that took me more time than I expected.

You are currently working on another short film, titled Hurricane, based on your comics of the same name. How faithful will the film adaptation be to the comics?

The film is based on the comics, but it is not an adaptation. Structure-wise it’s closer to the first volume, while the atmosphere is more similar to that of the second volume. At the beginning, I had the character, the environment, and the overall mood all thought out, but I had no idea what the film would be about. One of my friends invited me to a two-week scriptwriting workshop in Litomyšl where we had to come up with a story and present it in one or two sentences in a way that would get the listeners interested in it – not unlike in American writer's rooms, where the structure of each story is composed of fifteen so-called “beats” or plot points. This method was allegedly used to create the script for the first Star Wars film (episode IV). The character development of the hero is often tied to these beats – their comfort is disrupted in the initial beat, and they then have to overcome various obstacles before finally reaching the end of the story, at which point they should become a better version of themselves. But this is not really a good fit for the main protagonist of Hurricane. However, since the workshop was designed to apply this principle, we decided to use this method and see where it would take us. And it helped. We eventually managed to come up with a story. I suppose I can reveal that the main protagonist, a man with the head of a pig, falls for a stall girl and has to get a keg of beer for her.

What production stage is Hurricane in at the moment?

We are currently turning the storyboard into a layout, which we are simultaneously starting to animate. We have animators from France assisting us. They will do roughly a quarter of the film, and we will animate the rest ourselves. The layout should be finished by the end of this summer and then we’ll move on to postproduction, sound, etc.

Whose animated films or comic books (by contemporary authors) would you recommend to the fans of your films?

I would definitely recommend checking out Japanese authors, such as Hayao Miyazaki, Satoshi Kon, and Katsuhiro Ôtomo, whose manga Akira is now being published in Czech. I personally really like Japanese animated films from the 1990s, which combine traditional animation techniques with innovative ones. I feel like contemporary films are excessively influenced by computer technologies. I’m also fond of films by Sylvain Chomet, especially The Illusionist, and to mention at least one more comic book author, I like the aesthetics of comic books by Nicolas de Crécy. And to anyone who likes jean and nylon jackets, I would recommend films by Aki Kaurismäki.