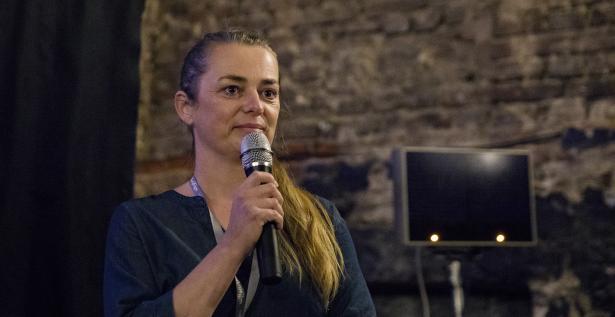 Ivana Laučíková: I like to fuse and combine techniques

The notable Slovak producer, director, and teacher Ivana Laučíková was one of the jurors of this year’s International Competition of Feature Films. We asked the founder of the feel me film production company and Homo Felix, the only Slovak specialized animation journal, about the developments in current Slovak animation, and what she likes about the films by her collaborator of many years, director Ivana Šebestová.

When did you first start animating methodically and why?

I’ve loved stories and I’ve been an avid reader ever since I was a little girl. Also, I’ve always loved to draw and I’ve always drawn a lot. The turning point for me was my visit to the Zlín Film Festival, in which I participated twice as a member of the children's jury. I was a child from an ordinary socialist small town, and all of a sudden, I got to experience the world of a film festival from the inside and from behind the scenes. I visited the Zlín Film Studios where several animated films were being made, and I was captivated. In animation, I saw all my passions combined! Roughly at the same time, the Academy of Performing Arts in Bratislava (VŠMU) opened its Animation Department, and I, a secondary school student at the time, decided I wanted to study there. Since that moment, I kept trying to make my own animations – by myself through experimentation and a lot of mistakes as well as with the help of various teachers. It was also thanks to them that I was later admitted to VŠMU, and I’ve been riding that train ever since.

What is your favourite animation technique?

Since Slovakia never had any big animation studios, Slovak animators have always adopted primarily techniques that can be used to make films in smaller teams. These include various types of stop-motion animation: small-scale puppet animation, cut-out animation, and pixilation. I personally like to fuse and combine different techniques to find the right art style for each individual screenplay. In The Last Bus, we walked a line between an animated film and a live-action film because we recorded slow-moving actors using stop motion, and I’m currently making my new film Milosť by combining pixilation with a collage consisting of photographs used for the backgrounds and hand-drawn elements. I produced films by Ivana Šebestová, who’s a master of cut-out animation, and Joanna Kożuch, who combined pixilation with action painting.

Could you describe how the animation industry in Slovakia has been developing recently and are there any substantial differences compared to what is currently happening in Czech animation? Or do you think that the animation industries in both countries are so tightly interconnected that they cannot be compared?

I would say that the situation in animated filmmaking in Slovakia has changed greatly in the past ten years. Around 2010, the industry was dominated by short films because it was the only format that could be funded with public resources and produced in the underdeveloped professional environment back then. The standardization of financial support resulting from the foundation of the Slovak Audiovisual Fund in 2009 and increasing support by Radio and Television Slovakia (RTVS) gradually revived the production of classic television formats (series and TV specials for children) as well as feature films. A great majority of feature films are co-produced by several producers, and the main co-producers are almost always Czech partners. I’d say that in the Czech Republic, the trend of moving from short films to feature-length films is also very strong. One such example is Michaela Pavlátová, who made a name for herself as an author of brilliant short films, and recently, literally a few days ago, triumphed at Annecy with her feature film My Sunny Maad.

How do you regard the current state of animated filmmaking at VŠMU? Has it seen an increase in the number of young talents like, for example, the Department of Animated Film of the TV School of Academy of Performing Arts in Prague (FAMU), the Animation Studio of the Tomas Bata University in Zlín, or the Academy of Arts, Architecture & Design in Prague (UPRUM)? Whose films should we look out for in the future?

The Animation Department at VŠMU has produced several exceptional talents in recent years. Unfortunately, the most remarkable ones decided to pursue their master’s degrees or PhDs abroad, mostly in the Czech Republic. The talented generation studying at FAMU partly consists of Slovak students who previously studied at VŠMU – Martin Smatana, Michaela Mihalyiová, and David Štumpf. VŠMU needs to initiate some recovery processes in order to retain talented people like these in the future – it needs to provide them with the space and support that will convince them to keep studying at the school and help them unlock their full potential.

You founded the feel me film production company. What was it like in the beginning, and how is the company doing now?

The feel me film company was established in 2006, shortly after I and several of my schoolmates graduated from the Animation Department. We entered a professional environment, in which there was not a single production company that was producing animated films. If we wanted to make films, we had to start producing them ourselves. This was not just my case but also the case of directors Katarína Kerekesová (Mimi & Líza) and Vanda Raýmanová (The Tots) – like it or not, in addition to being animators, we also had to start producing. With our company feel me film, we produced several debuts of the nascent generation of authors. In 2010, our company started publishing the professional journal Homo Felix. However, the activity of feel me film was impeded for a long time because I went on maternity leave with my two adopted kids. Taking care of them has not been easy, and I’m having a tough time getting back to work.

As you mentioned, you founded the animation journal Homo Felix, and you were formerly also its editor. What led you to found the journal? Were you missing this type of periodical on the Slovak market?

Each author thinks and creates in a different way. I need to read, analyse, supplement, understand things anew in new contexts...  And I couldn’t find the necessary theoretical sources that would satisfy this need of mine not just in Slovakia, but not even on the Czech or international markets. A lot of publications are being written on filmmaking as such, but there’s very little specialized literature on animation. At that time, I was also teaching theoretical subjects and the history of animation at VŠMU so I was well aware of students’ needs – time and again, I struggled to recommend suitable specialized literature on animation. I founded Homo Felix to at least partly fill in this gap. In it, I offered film theoreticians focusing (besides other topics) on Slovak and Czech animation space where they could publish their articles, we did interviews with world-renowned authors, we mapped the history of Slovak and world animation, and we also covered experimental animation and anime. The journal was very well received and became popular with experts and professionals so, after 4 years, we tried transforming the concept into an international journal, and we published one issue in English. Kamila Boháčková was the editor in chief, and the issue focused primarily on animation in the Visegrad countries. It was a huge amount of work with a good result. But then I had to dedicate myself to my motherly duties, and, unfortunately, I was unable to find anyone both in Slovakia and the Czech Republic who would continue publishing it.

You collaborated on a number of projects with director Ivana Šebestová (Four, Snow, Yellow...). How did you two meet, and how did you come to work together? What do you like about her films?

Ivana was my classmate at VŠMU, and I produced her first film because I wanted to help my entire generation of authors to stand on their own two feet. She’s wonderful to work with – besides being original, she’s also very independent and reliable. Her films are part of the “female wave” of animation that emerged in Slovakia after 1989 as a brand new phenomenon. Its authors explored topics such as the way women experience love, relationships, and sexuality. Previously, under the socialist regime, these topics were forbidden. I think it’s an interesting socio-cultural phenomenon that is worth studying in a broader social context as well.

Together with Martin Snopek, you co-directed the distinctive short film The Last Bus, which has won numerous festival awards. How did you come up with the idea for this film, and what did your collaboration look like?

Martin Snopek is a very unconventional figure in the world of Slovak animation – he’s like a film character himself. He can be naïve, funny, cheerful, but he’s also a beautiful and unusual human being. The idea for the film The Last Buscame from his own – very funny – experience when he fell asleep on a night bus and had to walk home in the dark through a dangerous forest. What initially looked like a joke or a bizarre sketch, later, as it was adapted into a screenplay co-written by Patrik Pašš, turned into this terrifying parable about refugees. I initially got to participate in the making of the film as a producer. When Martin presented the screenplay to me, I was thrilled, and I immediately knew it had to be made into a film. At the same time, we both knew that production-wise, pixilating masked actors on an old bus in a dark winter forest at night was a suicide. But we still went for it because we were young, idealistic, and we had no kids. During the shooting, which was extremely difficult, I started co-directing. There were so many tasks to be done and decisions to be made that it would be simply too much for one shy animator. We also did the sound and editing together, during which we vigorously debated every step, and we argued until we both agreed on every decision. It worked out, but to work in such conditions long-term would be exhausting and unfeasible.

Are you currently working on any new project? And if so, could you say a few words about it?

I’m preparing my author short film Milosť inspired by an experience I had long ago with a group of people who called themselves Havrani. They all had Asperger’s syndrome, were masters of different arts and knowledgeable in different fields. They formed a string quarter led by a Jew named Petr. After one of their concerts, they were brutally assaulted by a group of neo-Nazis in the streets of Bratislava. I recalled this experience when a party with neo-Nazi leanings got into the Slovak parliament. Uneducated people without any ethics began to populate the public space and gradually ruthlessly pushed out the educated, talented, gentle, and respectful ones. These dark undercurrents have always been present in the Slovak society, but they were never tolerated to such a great extent. My film reflects on these topics. I’m also starting another project that is indirectly related to these developments. Together with Katarína Kerekesová and screenwriter Katarína Moláková, we’re developing a concept of an educational series for children in the early grades of elementary school, in which they will learn about the subjects that are taught at elementary schools with a class of woodland animals. We decided to create this project because we are well aware of how desperately education in our country needs to be supported. We have to do everything in our power to support it.

Do you have any unfulfilled dreams related to animation that you would like to achieve?

Since I’m taking care of two little children and because I’ve spent the last one and a half years either homeschooling or in quarantine due to the pandemic, my biggest dream at the moment is to be able to work 8 hours a day again.