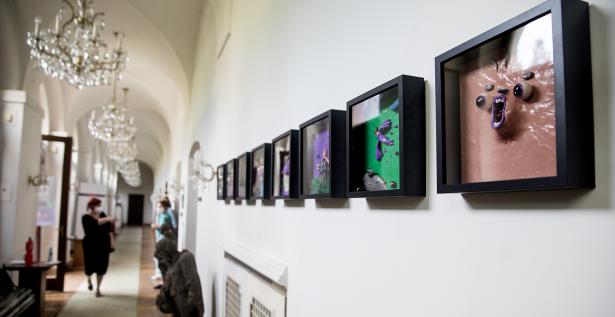 This year’s visual identity of the festival was created by the duo of unconventional directors Eliška Oz and Lee Oz, whose music video for the song Shredder by TALYA la lia, won the Music Videos category of the Czech Horizon national competition last year. In our interview, they talk about how they created the visual identity, what mode of work suits them the most, and what they think about how the topic of the environment is addressed in contemporary animation.

You’re the authors of the visual identity of this year’s 20th anniversary Anifilm. How did you get to work with Anifilm and what was it like?

Eliška: Anifilm approached us about a year ago – even before the previous festival took place. Pavel Horáček wrote to us asking if we would like to send him some drafts.

Lee: But I can’t remember if it was a competition. If they did approach anyone else, we didn’t know about it.

Eliška: The collaboration itself developed gradually, step by step. We began with some smaller designs for social media, and we didn’t start working on the jingle, which for us was the biggest and most important element, until February 2021. And then we just dove into it headfirst. We then spent about two months animating intensively.

Lee: But this kind of intensive work in waves suits us. I would characterize the whole process as a sort of searching. We like when a project allows us to improvise and when we ourselves don’t know beforehand what the result will look like.

Did you have any instructions as to what elements should or shouldn’t be part of the visual identity?

Lee: We didn’t get any such specific instructions from the festival, but when we sent in our first storyboard, it was indicated to us that it should look different (laugh).

Eliška: Originally, the theme of the festival was supposed to be Japan, but the organizers told us that we don’t have to adhere to it, so we didn’t. The central element of the first draft was the environment, and Anifilm then decided that the theme of the festival would be environmentalism, which fit the draft well so we subconsciously kept heading in this direction.

How important is the topic of the environment to you personally? Do you think contemporary animation addresses it sufficiently?

Lee: The topic is very important to us, now more than ever – global warming being one of the reasons. I feel like I’ve been seeing it more and more not just in animation but in art in general.

Eliška: The topic of the environment concerns us, but I don’t know how often we ourselves address it in our works. We did a few short videos, which dealt, for example, with the near future or the interconnection of artificial intelligence with the environment, but that’s about it, I think. As to other authors, what immediately sprang to my mind is the film Wolfwalkers by the Cartoon Saloon studio, whose films often include motifs of nature and relationship to the environment. This film clearly shows how humans interfere with the environment and how much it affects all surrounding life. But otherwise, we, unfortunately, haven’t had much time to watch animated films lately because we’re either working or taking care of our two-year-old, so we’re happy when we manage to take a breather. (laugh)

Certain elements and colours appear repeatedly throughout your visual identity – for example, the contrast of purple and green, short animated sequences with animals and plants, and you’ve also included some microorganisms or germs (one of them strongly resembles the coronavirus)... What inspired you when you were creating the visual identity besides the theme that you had been given?

Lee: It’s hard to say what inspired us. The fact is that for quite a while, we didn’t really know what we were doing. After we rejected the first draft that we mentioned, our next idea was to use a couple as the central element of the identity because I and Eliška are a couple as well, but that didn’t work out either… I actually don’t even know based on what we decided what to include in the identity. I remember that Eliška just randomly drew some birds, and we really liked the drawings so we decided to include a bird in the design. And the virus that gets squashed by the big hand is definitely coronavirus even though we didn’t plan it initially. I suppose we just really wanted to be done with it.

Eliška: I guess that was the work of our subconscious. Generally speaking, our works are always eclectically spontaneous so we usually don’t draw many sketches. We do those very rarely. On the contrary, we often make drafts using modelling clay so that we can get an idea of what the finished frame will look like. And we mostly pick colours that we just feel will fit the design.

How long did it take for you to finish the visual identity?

Eliška: We created the very first piece even before the last festival took place. I think it was sometime in autumn. Before we started working on the jingle, we handed in various bigger chunks of the identity at irregular intervals.

Lee: The very first thing we finished was the logo.

Eliška: Yes, Lee designed it in five minutes. We made some more versions, but the first one turned out to be the best. We finished the jingle just a few weeks before this year’s festival.

What did you enjoy the most about your work on the visual identity?

Eliška: What I enjoyed the most was definitely the animating itself.

Lee: I enjoyed the animating part as well, but I also had a lot of fun with designing the merchandise. It’s great when you can create something tangible, something you can touch. And I also enjoyed making drafts from modelling clay, which we then used to create the vector designs. It’s interesting how you can transform one kind of material into something completely different.

You made the identity using stop-motion claymation, which you use in a lot of your works. What is it about this animation technique that appeals to you?

Lee: I would describe our favourite technique as something between 2D animation and stop-motion animation. I’d describe our animating style as very sketchy. It’s a technique that allows us to play around and experiment in our work.

Eliška: I think this technique gives us a lot of options, and we haven’t even managed to explore all of them yet. When we look at our works, we feel that we’re starting to be a little repetitive, and we would like to move on to something a bit different, but at the same time, we don’t want to abandon this technique because we know that we can still use it to make something new and original.

Lately, you have been creating mostly music videos and commissioned short films. What is it that suits you about this form of work?

Eliška: At the moment, it’s definitely the convenience. Since these are smaller projects, we always have predetermined deadlines for each piece, and in the meantime, we have time for ourselves and our family. When we work on a long-term project, we feel like we’re under a lot of pressure and it’s hard for us to take a break. But when you finish something shorter, you can better enjoy your time off.

Lee: I like working on many short commissions primarily because you get to try new things and learn something. If we kept working on one project for a long time, we would come to a point where there would be nothing new to try anymore and we’d start working a bit mechanically, which would be a shame.

How often do clients approach you with such projects, and how do you choose with whom you will work?

Eliška: They often come in waves. It happens sometimes that we get no commission for a long time, and then we get approached by three different clients in one week.

Lee: Exactly. We often work on three smaller projects at once, we spend three months working intensively, and then we can relax for a month or two.

Eliška: We choose projects based on whether we like the client and whether they give us some freedom.

Lee: The kind of client that we like the most is a client who doesn’t know what they want because that usually means we can do things our own way and do our very best. We often choose projects based on three criteria – whether they give us an opportunity to learn something new, whether they pay well, and whether we’ll enjoy working on them and have some fun doing so. If a project meets at least two of these three criteria, it means it’s going to be good.

Do you plan to create any author projects in the near future? If so, will it be something similarly personal like our film Very Close?

Eliška: When we finished Very Close, we agreed we never wanted to do anything like it ever again. For that film, we picked the most depressing things that had happened to us in the past year, and we shut ourselves in our studio for several months where we were constantly in contact with items that reminded us of those sad events. That was very tough mentally.

Lee: On the one hand, it served as a sort of art therapy; on the other hand, I think we spent a lot more time working on it than we should have.

Eliška: As to new projects – until today, we thought we wouldn’t have anything new, but then producer Libor Nemeškal contacted us and said he had something for us. But I think we’re not supposed to talk about it for now. And we were also approached by our friend Ori Goldberg with a project, for which he wrote the script. He asked us to create the visuals and animate it. It’s a story about the symbiosis between man and nature so we’ve circled back to the initial topic

Lee: I think the only thing we can say for the time being is that this project will be rather personal as well.