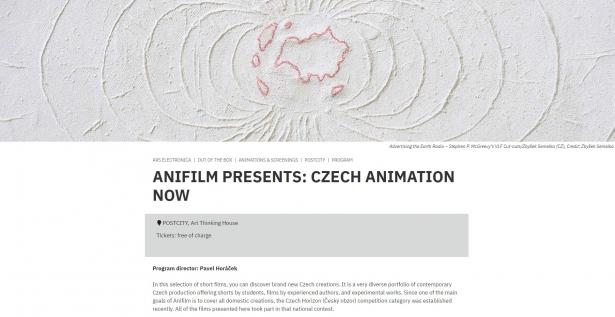 Anifilm's activities do not end with the festival. In addition to the ongoing projects Aniont and Anifilm Distribution, the organizers also focus on screenings abroad. The programme called Contemporary Czech Animation, mapping successful and interesting Czech animated films of recent times. It could be seen during the Anibar in Kosovo.In September, it will be on display at Ars Electronica in Linz or at the festival in Varna, where, in addition, the dramaturge of the programme (and the Anifilm festival as well) Pavel Horáček will serve in the jury. And Czech animation will also travel outside Europe. The programme will be screened at the AniNation festival in Jerusalem during November, thanks to an agreement with the Israeli Czech Center.

Cooperation with the Czech Center in Bucharest was also enriched this summer. As a result, Anifilm prepared several Czech short films that were screened as pre-films during the Cinemasop festival on the Black Sea coast. Follow our Facebook or website - more events are coming soon.